How a design template helps me make easy to run adventures...

My recent foray into one-page modules started with a minor design epiphany, namely the three questions that inspire movies:

Finding answers to these questions inform a lot of story lines. They reveal major factions, hurdles and stakes, i.e. everything a module needs. But I also don't want to prescribe everything in open gaming sessions, so one-shots or insertable modules it is then.

Here you specify who they are and what they want. Usually what they want is dictated by someone else. I.e. they pick their mission with the module already assuming they need or want to do it. Big assumption, I know, but necessary. The idea is that you can use or prep several of these mini modules  and in a campaign setting have the players choose which they go for. In a one-shot, the mission is a given.

This is what you actually prep and this section is all about the second leading question of why they can't have it and what happens if they do not get what they want. My recommendation is that each of these questions gets a d6 random table on which you can roll or decide during play.  The essence behind the questions is:

A) Problem on the way?

This is what they need first and a challenge at the beginning of the mission. An encounter, an entry fee, a hazard or obstacle they first need to overcome to even get close to "what they want and who has it or whose help they need". Maybe they first need to track down, who has what they need or how to get there. To find an "in". The answer is of course in, how the players actually avoid, overcome or solve this problem.

B) What is special about the location?

This could also be your first question, but it usually makes sense to place it after they actually get in. You can of course use this as a rumor or pice of information they already have. "Special" here is a stand-in for words like dangerous, strange or wrong. Something that makes this extra complicated, magical or weird.

C) Whose help they need?

Their in-between goal and usually a faction at play. The d6 structure allows me to introduce several faction that I can than use to play out against one another on the fly. Often at least one of the factions might have played a role in the "problem on the way" section already, so that the players act against something or someone familiar. This plays into the next section.

D) What weren't they told?

This could refer to the original mission givers or the "helper". The general idea is that there might be a nasty or at least unwelcome surprise in wait for them, connected to what they are trying to do. This plays strongly into the original question of "why is this happening now" and is the unknown motivator behind the factions that try to use the PCs as their play ball. This is where you draw a lot of fun from. You do not have to come up with the ultimate twist. The PCs may expect a trap or to be betrayed. That is completely fine.

Sometimes the answer to this question changes what condition the players consider a success or the status quo of faction alliances, i.e. maybe the Elders really are bad guys from the players view and they do not want to accomplish their mission.

You can reveal something they expect here too. Oh, an important point: Any roll or table result can be replaced with something better that you or your players come up with during play.

E) Why can't they just have it?

This too links into their helper. Wouldn't it be easy and nice if they could just get what they want? Well, as you know, in most stories there is yet another complication that the player characters need to overcome. A variant of this is that the item is easy to get, but that the possession in itself generates a complication. To use an example from Omega Soup: Maybe the naked hermit simply has the car battery around and gives it to them willingly, but its empty. Now they need to acquire a charge. You see? A complication. Of course you could play it more in the way of the crime lord not wanting to part with it until they smash someone's knees.

F) Problem on the way out/back?

And a final complication or problem, once they accomplish their mission and got what they want. This problem may also occur if success is not in sight and they just try to get out alive. This may also not be easy. This challenge often endangers either their ultimate success (i.e. they can still fail if someone else takes the McMuffin from them) or their survival. Be clear for one shots that it is fine for characters to sacrifice themselves for the ultimate success.

3. Results of the Action

I consider this final section as a series of questions, too. Of course you should give hints at the resolution to the questions of:

Sometimes there are clear binary conditions, too. In my "ESCAPE!" scenario for "NOT A DRILL!" the crew either gets on the last escape pod out of the star ship before it blows up or not. Many situations are less clear, however, especially in campaigns. So, I do recognise that a lot of factors can play into these questions and thus I merely suggest probable courses. This piece of the puzzle can be something you have to resolve yourselves.

How does it look when it all comes together?

Well, here's what you get with Omega Soup posted together a little from the PDF. Hope this was interesting to you, I'll keep on using and refining this structure, but finding it has greatly helped me design and publish adventures. Currently I am trying to see how that plays out in campaigns, versus one-shots. So, let's see what I learn. If you have any suggestions or questions, feel free to post! I'll answer to the best of my ability. 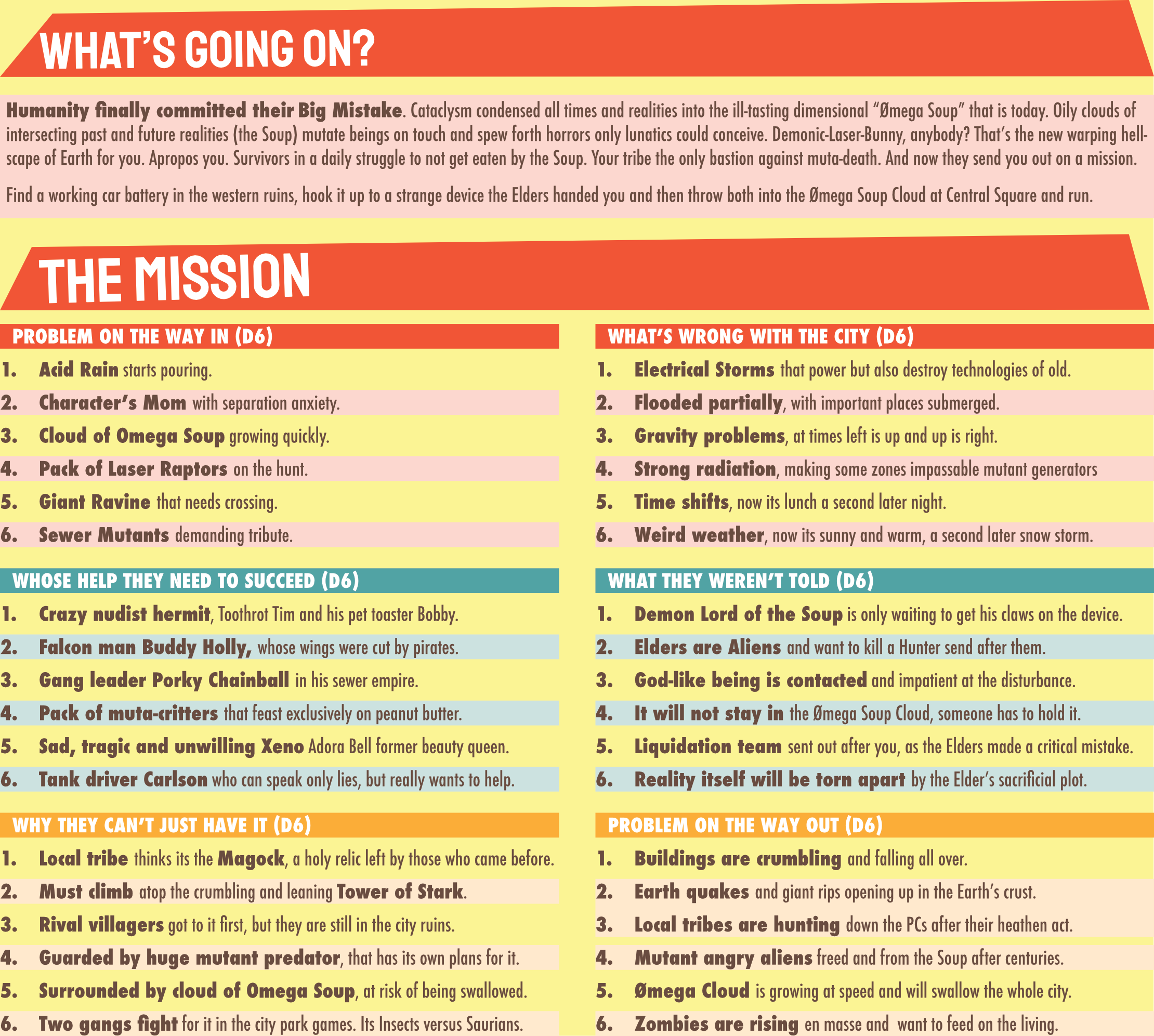 Gonzo post-apocalyptic TTRPG for 1-6 players on one page.